The Donors of the Hall 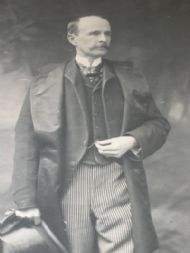 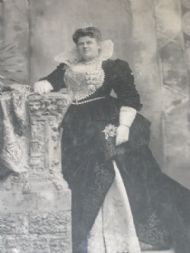 Bradley Martin and his wife Cornelia Sherman Martin.
She is dressed as Mary Queen of Scots; her pearls once belonged to Napoleon's Empress Josephine. This is the outfit she wore to a Ball they gave in New York in February 1897. The outcry over the Ball's cost (over $400,000) at a time of recession was a cause of the Martins' self-imposed exile from the USA.

New York financier and industrialist Bradley Martin (1841-1913) rented the Balmacaan House and its estate from the Earl of Seafield for many years from the 1880s onwards. He and his wife Cornelia (1845-1920) loved to entertain and guests came from far and wide to enjoy their hospitality. They were considerate employers to the many local folk who worked on the estate.

After their daughter-in-law's parents donated the Phipps Institute to Beauly, the Bradley Martins decided to follow suit and build a hall in Drumnadrochit. The Hall has been used by the surrounding community ever since, and it's hard to imagine life in the Glen without it.
Left: The newly built hall in 1906

After Bradley Martin's death in 1913, the community of Glen Urquhart subscribed the money to erect an obelisk in his memory. It can still be seen standing near the Hall, on the corner of Blairbeg and the A82.

Bradley Martin's brother, Frederick Townsend Martin, was a celebrated New Yorker, prominent in society on both sides of the Atlantic. Author of "The Passing of the Idle Rich" and "Things I Remember" he is also remembered for saying, "We are rich. We own America. We got it, God knows how, but we intend to keep it." In the Hall Annexe is a framed photograph of the author of this astonishingly frank statement, clad in tweeds, leading a procession of children from the Hall.

Cornelia Sherman Martin was the daughter of Isaac Watts Sherman, banker and financier, and a member of one of the oldest families in the state of New York. Her niece Mildred Sherman married the 5th Baron Camoys.

It was at Balmacaan House that Bradley and Cornelia Martin's daughter Cornelia met the 4th Earl of Craven; they were married in New York, April 1893. She died  in 1961 at the age of 84.
Right: Balmacaan House, since demolished.

Bradley Martin Junior married Helen Phipps whose father Harry Phipps was the Pittsburgh steel magnate and partner of millionaire philanthropist Andrew Carnegie. The Phipps family rented Beaufort Castle, about 15 miles from Drumnadrochit, and donated the Phipps Institute to the nearby town of Beauly.

Bradley and Helen Martin had four sons, including twins Alistair and Esmond.  Their Alfa Romeo car (pictured, left) which Eugen Bjornstad drove in the Vanderbilt Cup Race of 1936, was painted in the estate colours with Balmacaan inscribed on the door. Esmond Bradley Martin died in 2002 and his NY Times obituary reads "He had an astonishing mind, alive with dynamism and originality that knew no horizons. An alumnus of Princeton, he was, among other things, a brilliant chess player, a discerning philatelist, a well-known orchid cultivator, a collector of fine watches, books, and English antique furniture,  a talented amateur tennis player who once bested Pancho Gonzales, a world fly-fishing record holder for Atlantic salmon and excelled in his financial affairs, successfully wildcatting in gas, oil, and other investments. His son, Dr Esmond Bradley Martin is a noted ecologist and a world expert on rhinos".

No less than 37 descendants of Bradley and Cornelia Martin travelled to Drumnadrochit from all over the world to join the community in a week of celebrations during July 2006 marking the Centenary of the opening of the Hall.
(Right: Debbie Surtees dances during the finale concert)