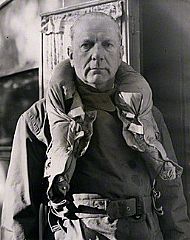 John Rhodes Cobb grew up near Brooklands,  Surrey, and won his first race there in 1925. During the Thirties, John Cobb held all the speed records for time and distance, up to 24 hours. He was the first man ever to reach 400mph on land, and held many trophies. In 1952 he came to Loch Ness to make an attempt at the world water speed record. After many successful trials, on 29th September, his boat 'Crusader' crashed at the end of the first run, having passed 206 mph (which would have been a new record, had there been a second run). Cobb was killed instantly. 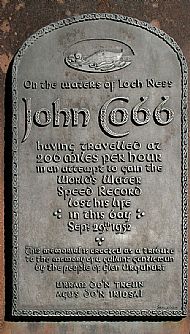 Glenurquhart's Community Association raised funds for a memorial overlooking the Loch where Cobb died. It was designed by George Bain, "the Master of Celtic Art", and was dedicated to Cobb's memory in a service held on the first anniversary of his death.

The ceremony was televised, and broadcast on the radio. The memorial is visible today on the south side of the A82 about a mile SW of Urquhart Castle; there is a signboard, also erected by the Community Association, at the layby on the opposite side of the road (which is dangerous to cross due to the speed of oncoming traffic).

In 2002 Glen Urquhart Heritage Group mounted an exhibition to mark the 50th anniversary of the death of John Cobb, with photographs, memorabilia, films and audio recordings. These included interviews with many Glen residents who, though only children at the time, remembered that day in September 1952 clearly and demonstrated that a deep affection for Cobb was still felt by all those in the community who had met him.

As his obituary in "Motor Sport" magazine said, "In a world where temperament is rife and line-shooting and self-advertisement is consequently not infrequent, John Cobb stood out as of a big, modest, calm, almost self-effacing disposition.”